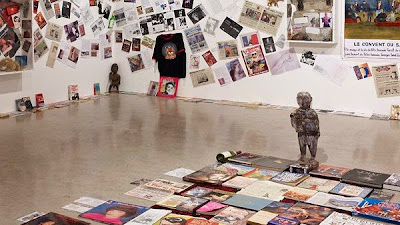 The Becoming of the Human Being
Wikipedia - "Georges Adéagbo (born 1942) is a Beninese sculptor known for his work with found objects. A native of Cotonou, Adéagbo studied law in Abidjan before moving to France to continue his studies. He returned to Benin in 1971 upon the death of his father, and began creating installations and environments in isolation from family and society. By the early 1990s he had begun to receive recognition, culminating in the reception of the Prize of Honor at the Venice Biennale in 1999. Adéagbo gathers the material for his art wherever he travels."
Wikipedia
Synchronizing Archaeology- Designation of Events
MoMA/PS1: Abraham – L’ami de Dieu
vimeo: La personne de Georges Adéagbo
Posted by Bill at 1:32 PM