The 9/11 Story Told at Bedrock, Powerful as a Punch to the Gut 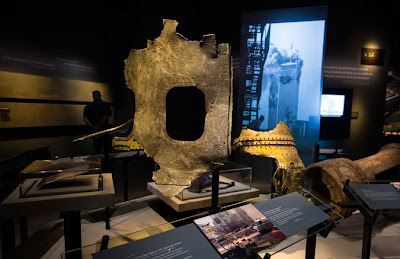 Airplane fragments displayed at the Sept. 11 museum.
"After a decade marked by deep grief, partisan rancor, war, financial boondoggles and inundation from Hurricane Sandy, the National September 11 Memorial Museum at ground zero is finally opening ceremonially on Thursday, with President Obama present, and officially to the public next Wednesday. It delivers a gut-punch experience — though if ever a new museum had looked, right along, like a disaster in the making, this one did, beginning with its trifurcated identity."
NY Times (Video)
NY Times: 9/11 Memorial Museum Faces the Latest Hurdle: Its Opening (Video)
NY Times: A New Story Told at Ground Zero - The National September 11 Memorial Museum (Video)