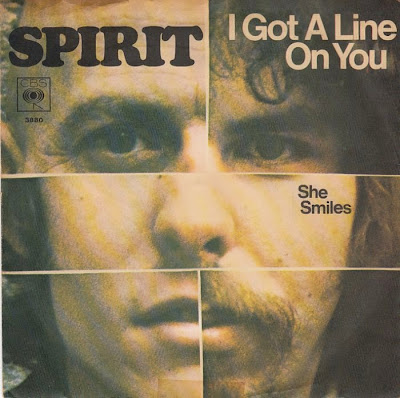 Wikipedia - "Spirit was an American jazz/hard rock/progressive rock/psychedelic band founded in 1967, based in Los Angeles, California. Their most commercially successful single in the US was 'I Got A Line On You', but they were at least as well known for their albums including The Family That Plays Together, Clear, and Twelve Dreams of Dr. Sardonicus. ... [Ed] Cassidy was instantly recognizable by his shaven head (hence his nickname 'Mr. Skin') and his fondness for wearing black. He was around twenty years older than the rest of the group (born in 1923). His earlier career was primarily in jazz and included stints with Cannonball Adderley, Gerry Mulligan, Roland Kirk, Thelonious Monk and Lee Konitz. He was a founding member of Rising Sons with Taj Mahal and Ry Cooder."
Wikipedia
Progarchives
YouTube: I got a line on you, Spirit (1968) 1:03:18, The Family That Plays Together (1968) 38:48, Twelve Dreams Of Dr. Sardonicus (1970) 54:09
Posted by Bill at 2:00 PM