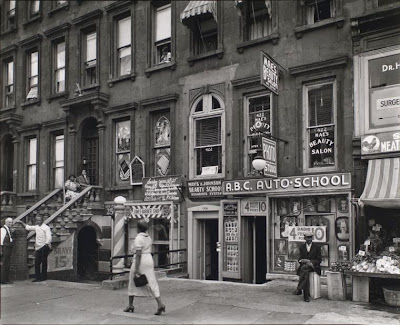 Wikipedia - "Founded in the 17th century as a Dutch outpost, Harlem developed into a farming village, a revolutionary battlefield, a resort town, a commuter town, a ghetto, and a center of African-American culture. ... Since the 1920s, this period of Harlem's history has been highly romanticized. With the increase in a poor population, it was also the time when the neighborhood began to deteriorate to a slum, and some of the storied traditions of the Harlem Renaissance were driven by poverty, crime, or other social ills. For example, in this period, Harlem became known for 'rent parties', informal gatherings in which bootleg alcohol was served and music played. Neighbors paid to attend, and thus enabled the host to make his or her monthly rent. Though picturesque, these parties were thrown out of necessity. Further, over a quarter of black households in Harlem made their monthly rent by taking in lodgers, many of whom were family members, but who sometimes brought bad habits or even crime that disrupted the lives of respectable families."
Wikipedia
Harlem History
New York Metro - A Harlem History
PBS: Harlem in the 40s
History: The Roaring Twenties (Video)
NBC: Living history in Harlem (Video)
YouTube: Ann Petry and Harlem's History, Daily Life In Harlem, Walking in Harlem - 125th street, The Streets of Harlem Documentary