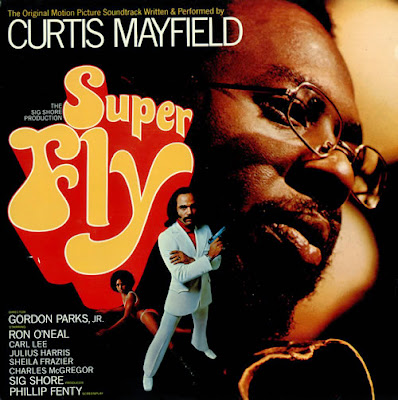 "The choice of Curtis Mayfield to score the blaxploitation film Super Fly was an inspired one. No other artist in popular music knew so well, and expressed through his music so naturally, the shades of gray inherent in contemporary inner-city life. His debut solo album, 1970's Curtis, had shown in vivid colors that the '60s optimist (author of the civil-rights anthems 'Keep On Pushing' and 'People Get Ready') had added a layer of subtlety to his material; appearing on the same LP as the positive and issue-oriented 'Move On Up' was an apocalyptic piece of brimstone funk titled '(Don't Worry) If There's a Hell Below, We're All Going to Go.' For Super Fly, Mayfield wisely avoids celebrating the wheeling-and-dealing themes present in the movie, or exploiting them, instead using each song to focus on a different aspect of what he saw as a plague on America's streets. "
allmusic
W - Super Fly (soundtrack)
YouTube: Super Fly Live, We Got To Have Peace, Keep On Keeping On
YouTube: Superfly Full LP