The Anarchist Movement in Barre 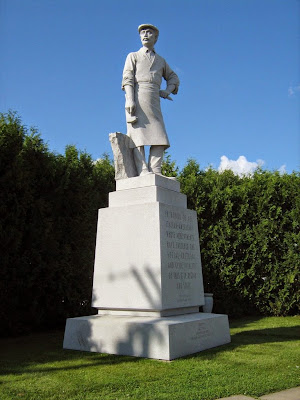 Italian-American stone cutter monument
"For a few years prior to World War I, Barre was a center for anarchist ferment in the United States. It was a time of rapid growth for Barre village and town, with the population increasing by 73 percent between 1890 and 1900, and another 27 percent from 1900 to 1910. Barre’s expanding granite industry fueled this population boom, composed largely of foreign-born skilled stone-cutters and quarrymen from Scotland, Spain, and especially northern Italy, making it Vermont’s preeminent melting pot, blue-collar community. By 1914, almost one-quarter of the town’s population was Italian. ..."
Vermont Historical Society (Video)
Times Argus: Luigi Galleani and the anarchists of Barre
YouTube: The Unconquered and the Unconquerable, Barre's undergoing a tremendous transformation
W - Socialist Labor Party Hall
[PDF] Italian Anarchism as a Transnational Movement, 1885–1915
Historic French and Italian Newspapers in Vermont
Posted by Bill at 2:57 PM