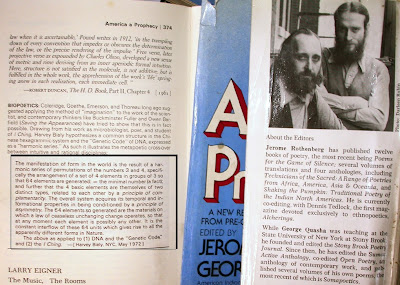 "... This groundbreaking anthology from the early 1970s takes such an approach in presenting the poetry of the North American continent, from pre-Columbian times to the present. It includes many recognized poets of the period, though appearing here in often unexpected contexts, and others who have been overlooked but whose contributions to the development of poetry are revolutionary. Starting from their own moment, the editors have read back into the more distant past and selected from broad American traditions works that had thitherto been considered outside the realm of poetry proper: the native poetry of the American continent, African-American sermons, blues and gospels, and the sacred, often innovative poetry of such radical religious groups as the Shakers."
SPD
amazon
Seven Words for Jerome Rothenberg by Peter Middleton
Jacket2: Helen Vendler on "America: A Prophecy," ed. Rothenberg & Quasha, with Rothenberg's reply
Posted by Bill at 1:51 PM