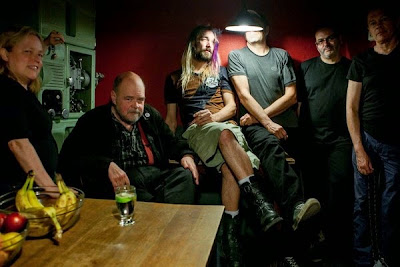 "Pere Ubu's 18th album, Carnival Of Souls, inspired by and derived from the band's live soundtracking of Herk Harvey's classic 1962 B-movie of the same name, is out on Fire Records next Monday, September 8. As is currently stated in bold on the front page of the band's website: 'the album is not about the movie' but rather 'a complex sensual response to living in a world overrun by monkeys and strippers who tickle your ears, cajole you to join in with their cavorting and then become vindictive when you decline'. It is also a wonderfully dark, pulsating road trip through a nightmare landscape mapped out in analogue and digital electronics, treated guitars, clarinet, voodoo drums and of course, David Thomas' unmistakeable otherworldly vocals."
The Quietus
Home of Ubu Projex
Pere Ubu – New Album Carnival of Souls (Video)
DROWNED IN SOUND (Video)
YouTube: Irene