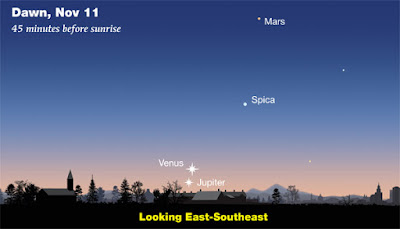 "As you'll hear in this month's astronomy podcast, Venus and Jupiter are putting on quite a show low in the east before dawn. The return to standard time (November 5th in the U.S. and Canada) means that most of us are still heading home from work as evening’s twilight sets in. but that's a good thing, because it means you can sneak in a little stargazing before dinnertime. Look low in the east before dawn to watch Venus and Jupiter draw closer and closer together. Make sure your horizon is clear in that direction. These shorter days also mean it'll likely be dark when you get up, and this month the predawn sky features some drama. Venus has been dazzling the past few months, but now it’s dropping fast. It rises about 90 minutes before sunrise as November opens but only 45 minutes ahead of it at month’s end. ..."
Sky & Telescope (Audio)
Night Sky: Visible Planets, Moon Phases & Events, November 2017 (Video)
Posted by Bill at 2:33 PM