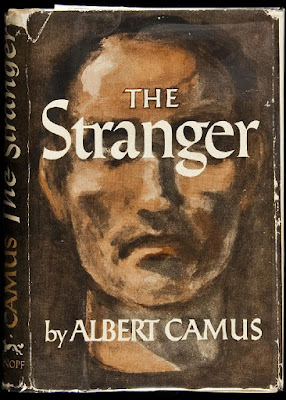 Wikipedia - "L’Étranger (The Outsider [UK], or The Stranger [US]) is a 1942 novel by French author Albert Camus. Its theme and outlook are often cited as examples of Camus' philosophy of the absurd and existentialism, though Camus personally rejected the latter label. The title character is Meursault, an indifferent French Algerian described as 'a citizen of France domiciled in North Africa, a man of the Mediterranean, an homme du midi yet one who hardly partakes of the traditional Mediterranean culture'. He attends his mother's funeral. A few days later, he kills an Arab man in French Algiers, who was involved in a conflict with a friend. Meursault is tried and sentenced to death. The story is divided into two parts, presenting Meursault's first-person narrative view before and after the murder, respectively. ... The Stranger's first edition consisted of 4,400 copies and was not an immediate best-seller. But the novel was well received, partly because of Jean-Paul Sartre's article 'Explication de L'Etranger,' on the eve of publication of the novel, and a mistake from the Propaganda-Staffel. ..."
Wikipedia
New Yorker - Lost in Translation: What the First Line of “The Stranger” Should Be
Smithsonian: Why is Albert Camus Still a Stranger in His Native Algeria?
New Republic: The Camus Investigation
[PDF] The Stranger (1942)
amazon 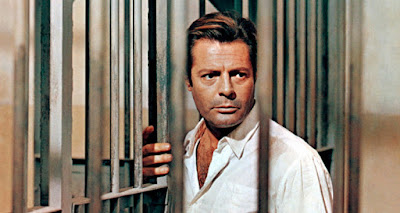 Luchino Visconti's The Stranger (1967) - "Beware the movie based on literature, or, in that showbiz term of art, a 'literary property.' Not because adaptations are an inferior form of cinema—I don’t believe that for a moment—but because they create an added layer of copyright issues for the film. When a movie stays long out of sight, and the studio still has prints, very often the reason you’re not seeing it has to do with the rights to its literary source. This is most likely why Lo Straniero, from 1967, directed by the great Luchino Visconti and starring Marcello Mastroianni and Anna Karina, has gone missing for so many years—never on VHS, never on DVD, unseen on TV, and infrequently revived in cinemas. ..."
Film Comment
W - The Stranger (1967 film)
senses of cinema - To Shoot at the Impassive Stillness: Marcello Mastroianni in Luchino Visconti’s The Stranger (Lo straniero, 1967)
W - Luchino Visconti
YouTube: The Stranger(movie footage) based on Albert Camus' masterpiece
YouTube: "The Stranger" by Albert Camus - 1967 - Dir. Luchino Visconti 1:42:52