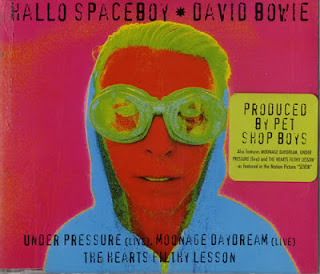 "The version of the single featured Pet Shop Boys remix as the lead track, not the original album version. In contrast to the original, the single remix was far more disco-oriented and featured additional lyrics sung by Neil Tennant. The introduction was sampled from the opener to Outside, 'Leon Take Us Outside'. Bowie initially expressed reservation about the additions, which referenced and 'cut-up' the lyrics to Space Oddity, but later agreed that they worked well so long as Tennant sung them."
Wikipedia
YouTube: David Bowie - Hallo Spaceboy (Pet Shop Boys Remix)
Posted by Bill at 2:26 PM