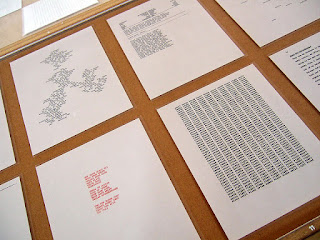 "While best known for his sculptures made from metals, positioned flat on the floor and placed in symmetrical configurations, a rich and significant element of Carl Andre’s practice remains largely unseen and unpublished. Throughout his life, language and poetry have been fundamental to the work of Carl Andre. From the beginning of his career, his poems have functioned as entries into catalogues about his work, appeared alongside his sculpture in exhibitions, formed exhibitions in their own right, been published in strictly limited editions, made appearances in scholarly writings about the artist, been repeatedly cited in relation to the development of avant-garde poetry."
Tate - Carl Andre: The Complete Poems
W - Carl Andre
Delia Solomons on Carl Andre
Carl Andre: Mass & Matter
Phaidon
Google
Posted by Bill at 1:44 PM