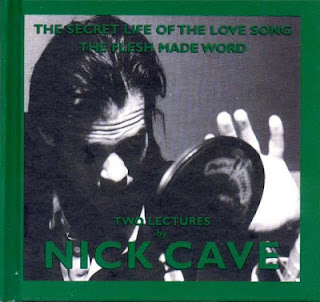 "This is a stunning recording -- stunning in the sense of its quality and its combination of philosophical soliloquy and heartbreaking music. It's also stunning in its effect upon the listener, rendering him or her mute -- stunned, as it were -- with reflection and awe. Combining two spoken-word pieces, one from the Vienna Poetry Festival and one from a BBC religion program, Cave manages to flesh out the spare poetry that is his songwriting by explaining the font from which it issues."
allmusic
Nick Cave
YouTube: Sad Waters, Sad Waters (Live)
YouTube: Secret Life of the Lovesong - Part 1 ( West Country Girl ), Part 2, Part 3 ( People Ain't No Good ), Part 4, Part 5 ( Sad Water ), Part 6, Part 7 ( Love Letter ), Part 8, Part 9 ( Far From Me )
YouTube: The Flesh Made Word
Soundcloud: The Secret Life Of The Love Song