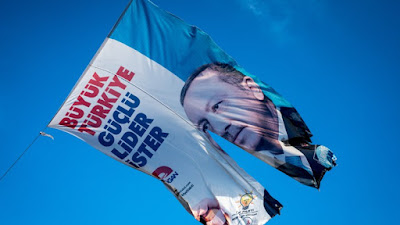 "In 1989, a small Islamist party called Refah, or 'Welfare,' holds a conference titled 'National Consciousness.' In the crowd are mustached men with lean faces; many of them are old, wearing skullcaps Muslims use during prayer. Soon, a tall, thin young man dressed in a well-tailored suit rises to speak. 'May the peace of God be upon all believers,' he says. His polite bearing, however, belies his firm message. He invokes the ur-enemies of Turkishness— 'Agop,' the Greeks, and 'Jacques' and 'Hans,' a reference to the Europeans. They distribute birth control to the villages, corrupt the youth, and scoop up Turkey’s national wealth, he claims, adding that Turkey’s bureaucrats, farmers, widowers, and orphans are all forced to pay them interest, 'that which will facilitate the reign of the Jew.' Meanwhile, the ruling class lies around on nude beaches, sips fancy alcohol, and gawks at exotic dancers from the far corners of the earth, he says. All the evil, theft, and corruption in the country, the man says, can be traced to a mentality of surrender to the West. But Turkey’s true heirs will eventually take their country back. ... In the years to come, the young man, Recep Tayyip Erdoğan, would be elected mayor of Istanbul, prime minister of Turkey, and, in 2014, president. ..."
The Atlantic
NYBooks: Will Turkey’s Voters Give Erdoğan the Imperial Presidency He Seeks?

2016 February: The Feminist, Democratic Leftists Our Military Is Obliterating - ﻿ Debbie Bookchin, 2016 May: Turkey’s Authoritarian Turn, 2016 July: How Turkey Came to This, 2017 March: As repression deepens, Turkish artists and intellectuals fear the worst, 2017 July: A Long March for Justice in Turkey, 2017 July: Radical Municipalism: The Future We Deserve, 2017 September: Istanbul: Memories and the City - Orhan Pamuk, 2018 January: Turkey’s State of Emergency, 2018 April: The Unlikely New Hero of Turkeys, 2018 June: How My Father’s Ideas Helped the Kurds Create a New Democracy
Posted by Bill at 4:32 PM