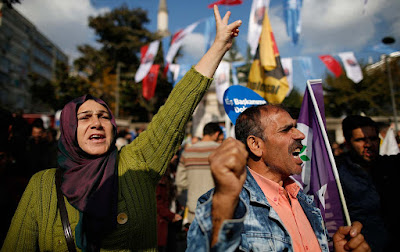 "Politics always involves a tension between laws and leadership, accountability and action. Emergencies occur, the ship of state needs to negotiate the storms of unexpected events; there is a need to act. For those who believe in the priority of rights as an ideal of politics, this can be a problem. The Italian philosopher Giorgio Agamben mused on this in his State of Exception, arguing that sovereignty and constitutions are unstable partners, with the sovereign always longing to slip the constitutional net. I was reminded of this during my recent trip to Ankara as part of a European socialist delegation in order to witness the trial of the two leaders of the mainly Kurdish Peoples’ Democratic Party (HDP in Turkish), Selahatin Demirtas and Figen Yuksegdag. The prosecutors have asked for a 142-year sentence for each of them. It is likely that their request will be granted. There is currently a 'state of emergency' in Turkey, where President Recep Tayyip Erdoğan has developed a peculiar form of national Islam, an unprecedented combination of Atatürk and the Muslim Brotherhood. ..."
The Nation
The Nation: In Turkey, Repression of the Kurdish Language Is Back, With No End in Sight

2016 February: The Feminist, Democratic Leftists Our Military Is Obliterating - ﻿ Debbie Bookchin, 2016 May: Turkey’s Authoritarian Turn, 2016 July: How Turkey Came to This, 2017 March: As repression deepens, Turkish artists and intellectuals fear the worst, 2017 July: A Long March for Justice in Turkey, 2017 July: Radical Municipalism: The Future We Deserve, 2017 September: Istanbul: Memories and the City - Orhan Pamuk
Posted by Bill at 1:59 PM