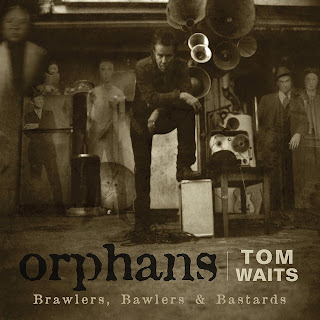 Wikipedia - "Orphans: Brawlers, Bawlers & Bastards is a limited edition three CD set by Tom Waits, released by the ANTI- label on November 17, 2006 in Europe and on November 21, 2006 in the United States. The album is divided into three sections, with each disc being a separate collection in its own. It borrows from Tom Waits’ typical rock sound, with the first disc being blues and rock-based, the second centred on slow-tempo, melancholic ballads, and the third on more experimental compositions. Additionally, the record contains influences of other genres, including folk, gospel, jazz and roots music."
Wikipedia
amazon
pitchfork
ANTI-
Contact: Bottom Of The World, Trampled Rose, You Can Never Hold Back Spring, The Day After Tomorrow, Lie To Me
YouTube: Widow's Grove, World Keeps Turning, You can never hold back spring, 2 19, Bend Down The Branches
Posted by Bill at 11:43 AM