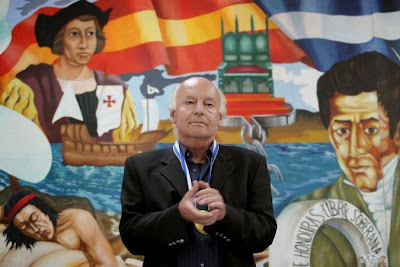 After a speech at the National Pedagogical University in Tegucigalpa, Honduras, in 2005.
Wikipedia - "Eduardo Hughes Galeano (3 September 1940 – 13 April 2015) was a Uruguayan journalist, writer and novelist considered by some, among other things, 'a literary giant of the Latin American left'. His best-known works are Las venas abiertas de América Latina (Open Veins of Latin America, 1971) and Memoria del fuego (Memory of Fire Trilogy, 1982–6). 'I'm a writer,' the author once said of himself, 'obsessed with remembering, with remembering the past of America and above all that of Latin America, intimate land condemned to amnesia.' ... In 1973, a military coup took power in Uruguay; Galeano was imprisoned and later was forced to flee. His book Open Veins of Latin America was banned by the right-wing military government, not only in Uruguay, but also in Chile and Argentina. ... He fled again, this time to Spain, where he wrote his famous trilogy, Memoria del fuego (Memory of Fire), described as 'the most powerful literary indictment of colonialism in the Americas.' ..."
Wikipedia
Guardian: Eduardo Galeano: 'My great fear is that we are all suffering from amnesia'
10 Eduardo Galeano Quotes That Will Change The Way You View Human History
Democracy Now!: Remembering Eduardo Galeano, Champion of Social Justice & Chronicler of Latin America’s Open Veins (Video)
Aj Jazeera: The beautiful game loses its man of letters
amazom: Books by Eduardo Galeano
Lannan: Eduardo Galeano with Marie Arana (Video)
Posted by Bill at 12:52 PM