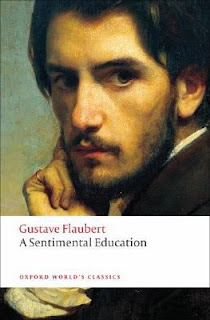 Wikipedia - "Sentimental Education (French: L'Éducation sentimentale, 1869) was a novel by Gustave Flaubert, and is considered one of the most influential novels of the 19th century, being praised by contemporaries George Sand, Emile Zola, and Henry James. The novel describes the life of a young man (Frederic Moreau) living through the revolution of 1848 and the founding of the Second French Empire, and his love for an older woman (based on the wife of the music publisher Maurice Schlesinger, who is portrayed in the book as Jacques Arnoux). Flaubert based many of the protagonist's experiences (including the romantic passion) on his own life. ... The novel's tone is by turns ironic and pessimistic; it occasionally lampoons French society. The main character, Frédéric, often gives himself to romantic flights of fancy."
Wikipedia
W - Gustave Flaubert
NYT: Gustave Flaubert
amazon
Posted by Bill at 2:03 PM