An Intro To Rebel Hip-Hop Of The Arab Revolutions 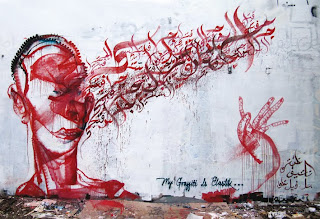 "Early adopters in countries like Morocco, Algeria and Palestine have a more strongly developed and time-tested hip-hop scene—but across the greater Arab world, hip-hop has risen up alongside folk anthems as a revolutionary soundtrack. And in the Western world, Arab diaspora rap preoccupies itself with questions of Eastern and Western dislocated identity. These artists take a great deal of inspiration from some of the greats of politically conscious rap in the eighties and nineties in the United States, particularly Public Enemy and Wu-Tang Clan. They also draw from the long history of Arab poetry and artistic political dissidence, from Khalil Gibran to Mahmoud Darwish and Ahmed Fouad Negm. Here is a handy starter kit for listening to Arab and Middle Eastern rap and hip-hop music."
The Awl (Video)
Beats and Breath (Video)
Revolutionary Arab Rap: The Index (Video)
Rebel Rap from the Outlaws of Hermel (Video)
[PDF] Esquire Middle East - Fight The Power
Hip-Hop Responds to Middle East Mobilization (Video)
Posted by Bill at 1:53 PM