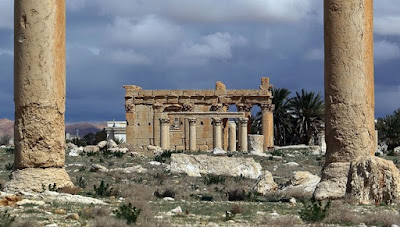 The Temple of Baalshamin, part of the ancient ruins of Palmyra, in 2014.
"Militants from the Islamic State set off explosions at a temple in the ancient ruins of Palmyra in Syria, activists and government officials said on Sunday, continuing a pattern of destruction that they have visited upon historical sites across the territory they control there and in Iraq. The Syrian Observatory for Human Rights, an activist and monitoring group based in Britain, said Sunday in a statement that Islamic State fighters detonated “a large quantity of explosives” that they had arranged around the Temple of Baalshamin, one of the most grand and well-preserved structures in the sprawling complex of ruins. A government official told reporters that it was heavily damaged by the blast. ..."
NY Times (Slide Show)
NY Times: The Islamic State’s Advantage at Historic Sites
Posted by Bill at 1:41 PM