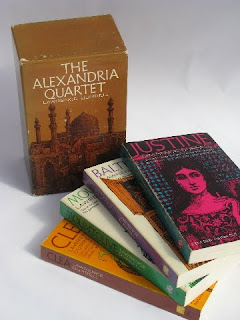 Wikipedia - "The Alexandria Quartet is a tetralogy of novels by British writer Lawrence Durrell, published between 1957 and 1960. A critical and commercial success, the books present four perspectives on a single set of events and characters in Alexandria, Egypt, before and during World War II. As Durrell explains in his preface to Balthazar, the four novels are an exploration of relativity and the notions of continuum and subject–object relation, with modern love as the subject. The Quartet offers the same sequence of events through several points of view, allowing individual perspectives to change over time."
W - The Alexandria Quartet
W - Justine
W - Balthazar
W - Mountolive
W - Clea
amazon: The Alexandria Quartet
Paris Review: Lawrence Durrell, The Art of Fiction No. 23
Durrell 2012: The Lawrence Durrell Centenary
Posted by Bill at 1:08 PM