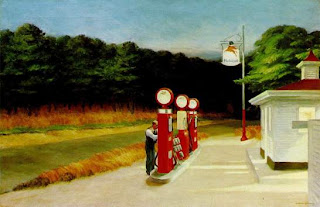 Gas, 1940.
"Modern Life: Edward Hopper and His Time traces the development of realism in American art between 1900 and 1940, emphasizing the diverse ways that artists depicted the sweeping transformations in urban and rural life that occurred during this period. The exhibition highlights the work of Edward Hopper, whose use of the subject matter of modern life to portray universal human experiences made him America’s most iconic realist painter of the 20th century."
Whitney, NYT, FT
Posted by Bill at 11:25 AM