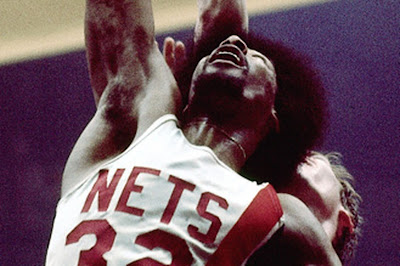 "1976 was an awkward time for the United States of America. The previous few years had seen the military massacre college students at home and abandon an unpopular, costly war abroad. A president had resigned, narrowly escaping impeachment. And as James Brown eloquently stated in his song, 'Funky President (People It’s Bad),' times were bad, people:


Stock market going up, Jobs going down
And ain’t no funky jobs to be found
Taxes keep going up, I changed from a glass
Now I drink from a paper cup, It’s getting bad

Amidst all the social tumult, the United States also prepared for the bicentennial of its revolutionary birth. It was a much needed shot of enthusiasm to reinvigorate the triumphant American spirit which was on a prolonged vacation after such harrowing gut checks. ... The dichotomy even extended to basketball. The New York Knickerbockers were falling off the turnip truck, while the New York Nets were riding high. ..."
Pro Hoops History
W - Knicks–Nets rivalry