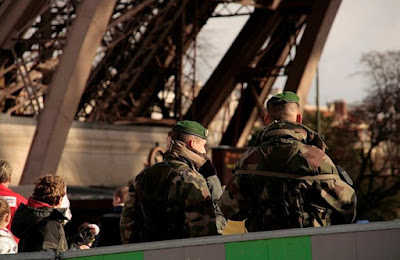 "Shortly before midnight on November 13, in the aftermath of terrorist attacks that left 130 dead and hundreds more wounded, French President François Hollande declared a national state of emergency. Not long thereafter, the Élysée issued a communiqué detailing its provisions, including the warrantless detention and house arrest of suspects, additional border controls, closure of schools and other public places, and expanded powers of search and seizure. Days later, the government presented parliament with a law extending the state of emergency for an additional three months, beyond the twelve days allowed under initial decree, and updating the existing legislation. ... A dramatic rhetorical escalation has accompanied this judicial response. Across the spectrum, politicians and commentators aver that France is now at war. ..."
Jacobin
Posted by Bill at 3:53 PM