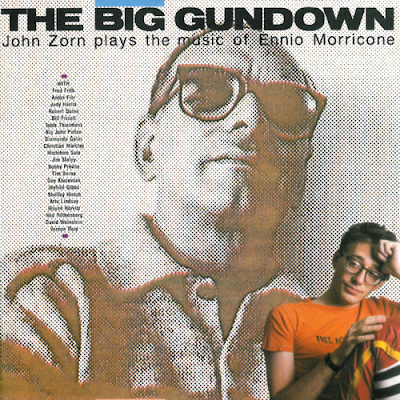 Wikipedia - "The Big Gundown is an album by American composer and saxophonist/multi-instrumentalist John Zorn. It comprises radically reworked covers of tracks by the Italian film composer Ennio Morricone. The album is named after a 1966 spaghetti western of the same name, directed by Sergio Sollima, starring Lee Van Cleef, and scored by Morricone. ... In 1985 Zorn had been working in New York City's experimental music scene for almost a decade (the album was originally to be called 'Once Upon a Time in the Lower East Side'), but The Big Gundown launched him to wider prominence. In the notes for the 2000 reissued CD, Zorn describes The Big Gundown as representing a creative breakthrough as well for being the first time he worked extensively with multi-track recording, overdubbing and ornate orchestration. ..."
Wikipedia
allmusic
amazon
YouTune: John Zorn plays Ennio Morricone - The big gundown, Peur sur la ville (Fear Over the City), The Sicilian Clan, Erotico (The Burglars), Once Upon A Time In The West, Svegliaffi & Uccidi, Milano Odea, Battle of Algiers