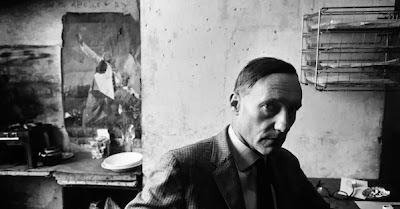 ‘William S. Burroughs: A Man Within’
"William S. Burroughs, at his centenary, remains an indelible presence. His writings, ideas, and influence are everywhere still, and it is as though the man himself were hovering right alongside them. So original a public persona, as vivid as ever some two decades after his death, is hard to shake. Few mugs are as iconic. The long poker face, imposing, rarely smiling (if not quite unfriendly), comes across as self-possessed as a cat’s. When there is a smile, it’s a little surprising: a delicate and playful thing, twitchy (never toothy), suggesting the giddy ambivalence of the solitary boy before a welcoming audience. And there’s the voice, prophetic and profane, a high nasal twang issuing from the top of the throat, determined yet reedy, before resolving itself into a contented grumble of half-chewed words."
Fandor
William S Burroughs 100
Telegraph: William S Burroughs: a Life by Barry Miles, review
NPR: 100 Years Ago, Writer William S. Burroughs Was Born
William S. Burroughs at 100: Exploding Five Major Myths
100 years of William S. Burroughs: The nakedness of words
YouTube: Kathy Acker interviews William S. Burroughs - part 1/3, part 2/3, part 3/3
Posted by Bill at 1:51 PM