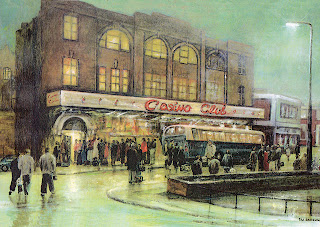 "One Saturday night ­in 1975, I met my mate at a shop in Manchester that would, for certain, sell you Bronchipax: ephedrine capsules, the poor-man’s speed, banned now but sold without prescription back then. We bought a packet each and swallowed the lot with tonic water: eight times the maximum adult dose. But what did we care about the adult dose? We were 15, and about to set off for the greatest dance club in the world. We reached Wigan Casino around midnight with my mate’s cousin who was a 'face' on the Northern Soul scene. That got us into a café nearby, packed – not with soul boys as I expected – but with music journos from London, cool Italians in micro-sunglasses, American vinyl collectors and other global bohemians."
Vice (Video)
W - Wigan Casino
BBC - Northern Soul: 40 years of the sound of Wigan Casino (Video)
YouTube: Wigan Casino - A Lifestyle Of Northern Soul