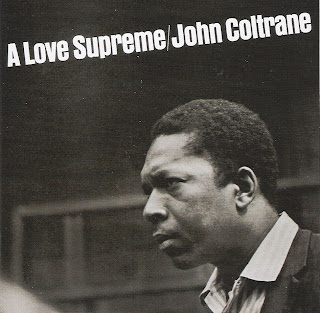 "Easily one of the most important records ever made, John Coltrane's A Love Supreme was his pinnacle studio outing that at once compiled all of his innovations from his past, spoke of his current deep spirituality, and also gave a glimpse into the next two and a half years (sadly, those would be his last). Recorded at the end of 1964, Trane's classic quartet of Elvin Jones, McCoy Tyner, and Jimmy Garrison stepped into the studio and created one of the most thought-provoking, concise, and technically pleasing albums of their bountiful relationship (not to mention his best-selling to date). From the undulatory (and classic) bassline at the intro to the last breathy notes, Trane is at the peak of his logical yet emotionally varied soloing while the rest of the group is remarkably in tune with Coltrane's spiritual vibe. Composed of four parts, each has a thematic progression leading to an understanding of spirituality through meditation. ..."
allmusic
W - A Love Supreme
John Coltrane’s Handwritten Outline for His Masterpiece A Love Supreme (Video)
amazon
YouTube: Rare Coltrane Video - Only Public Performance of A Love Supreme and Ascension
YouTube: A Love Supreme (1964) 1. Acknowledgement 2. Resolution 3. Pursuance 4. Psalm
Posted by Bill at 1:18 PM