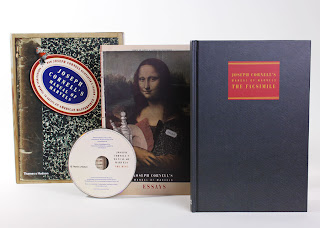 "Classified as a Surrealist, American artist Joesph Cornell is best known not for his abilities as a painter or a sculptor but as a collector. Cornell took pleasure in the hunt and liked to spend his time scouring secondhand shops for books, faded photographs and other small treasures—which he then used to construct whimsical tableaus. While these collages of curiosities dominated the majority of Cornell's work, they were not the only medium with which the artist toyed."
Cool Hunting
NYT: Cornell’s Almanac
amazon: Joseph Cornell's Manual of Marvels