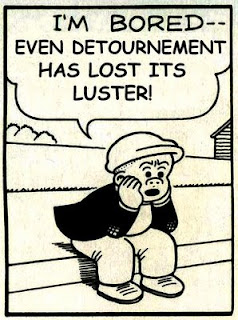 Wikipedia - "A détournement is a technique developed in the 1950s by the Situationist International, and consist in 'turning expressions of the capitalist system against itself.' Détournement was prominently used to set up subversive political pranks, an influential tactic called situationist prank that was reprised by the punk movement in the late 1970s and inspired the culture jamming movement in the late 1980s."
Wikiedia, A User’s Guide to Détournement, Détournement, Dagwood, Google
Posted by Bill at 11:54 AM